Judging is described as having an opinion of; assessing critically; inferring, considering or keeping a view; determining or evaluating; serving as a judge; judging and having a mental decision. May these quotes inspire you not to judge but to love others. 40 famous quotes on judging life lessons

1. “As a player, that’s not your responsibility to comment and to give your opinion on another player. As a quarterback, I don’t want another quarterback tweeting about my performance or judging me in that way.” — Eli Manning

2. “A word of advice is, when you judge someone, it doesn’t define the person that you’re judging. It defines you.” — Tulisa

3. “We must have the courage to confront dreadful views even in the people we love the most. But that’s difficult to do when we cast large segments of our fellow citizens into a basket to be condemned and disparaged, judging them even as we ignore that many of their deplorable traits exist in us, too.” — J. D. Vance

4. “I don’t go by or change my attitude based on what people say. At the end of the day, they, too, are judging me from their perspective. I would rather be myself and let people accept me for what I am than be somebody who I am not, just because I want people’s approval.” — Karan Patel

5. “With music, you’re laying it all out there. They’re judging you right away, and you can lose them quickly. With the comedy, you’ve always got another joke to redeem yourself. Or, even if you’ve only got one joke, at least the punch line is at the end. Then they have to at least pay attention until the end.” — Kevin Nealon

6. “I have no better way of judging guilt or innocence than anyone else.” — Robert Shapiro 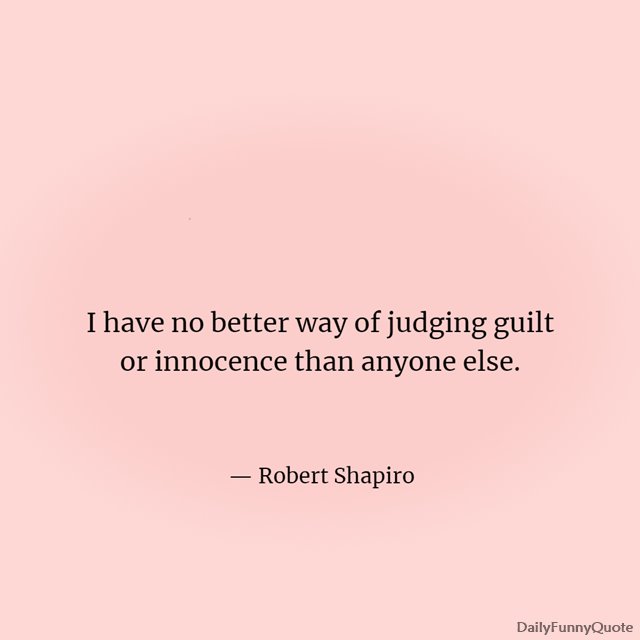 7. “I firmly believe that all human beings have access to extraordinary energies and powers. Judging from accounts of mystical experience, heightened creativity, or exceptional performance by athletes and artists, we harbor a greater life than we know.” — Jean Houston

8. “I see a lot of people judging me and my rookie season, but I’m not really worried about struggling. I know I’m only going to get better.” — Kevin Knox

9. “I think we’re all guilty of judging, and I look a certain way – I wear a lot of make-up and fake tan.” — Emily Atack

10. “Obama is like the kid brother whose only standard for judging his own achievements is the records his big brother set.” — Elliott Abrams

11. “When someone judges you, it isn’t actually about you. It’s about them and their own insecurities, limitations, and needs.” — Lulu

12. “I’m not great at judging a career. Or planning one.” — Jennifer Jason Leigh

13. “I am a singer. You love me or hate me based on my music. If you are judging me based on my nationality and religion, you are a racist. This is very offensive. I cannot encourage that.” — Adnan Sami

14. “Empathy is why entertainment is always growing, and for millennials, everyone is judging them and trying to grab their attention by insulting them. We’re living in a time where everyone has 25 profiles, and they’re having 25 conversations.” — Alia Shawkat

15. “I love judging food by its smell and feel and taste. The healthiest tomato isn’t always the perfect one that’s been covered in pesticides.” — Sheherazade Goldsmith

16. “Most designers don’t dress in fashion. They dress in an anonymous way so that people are just judging their work.” — Louise Wilson

17. “I am happy judging shows and making films. It is a good thing to do a film and then takes up a show, considering it also keeps your popularity alive.” — Farah Khan

18. “I wish America would stop judging and criticizing teens and instead, try to understand the battles they have to fight every day.” — Laurie Halse Anderson

19. “It’s great that Time is moving in the direction of validating those who, by choice or circumstance, will never be parents. But the point is not simply that society should stop judging those of us who don’t have children. It’s that society actually needs us. Children need us.” — Meghan Daum

20. “Judging from the letters I’ve received from obviously feeble-minded persons who wish I would write another These Old Shades, it ought to sell like hotcakes.” — Georgette Heyer

21. “Whether it’s a spouse, family member, coworker, former classmate, or the mother of your child’s best friend – you know exactly what I mean. Just when you feel your worst and are judging yourself harshly, someone comes along who seems determined to make you feel even worse about yourself than you already do. Who needs it?” — Gena Lee Nolin

22. “Monogamy is desirable for many reasons, especially in creating a stable, emotionally connected home for children. But judging from centuries of human behavior, it is also a very difficult standard to meet.” — Mary Gaitskill

23. “I’m a pretty organized packer, laying out everything beforehand, as I don’t like to take extra stuff. I’ve got a good eye for judging how much I can stuff into one suitcase. I’ve often not brought the right items, but I’d never avoided a chance to shop, unlike most men.” — Kyle MacLachlan

24. “Gamers have this tendency to turn games into mathematical equations, breaking them into lists of components like ‘presentation’ and ‘mechanics’ and judging each one on its own merits.” — Jason Schreier

25. “You’ve got to quit judging people just because they have an ‘R’ or a ‘D’ in front of their name. We don’t do that in Oklahoma.” — Markwayne Mullin

26. “I’m talking as a professional impresario. I’m not judging anybody at all.” — Norman Granz

27. “Everybody needs a little light in their life, and when they need prayer, they know where to come, because they know I love them all, and I ain’t judging nobody.” — Betty Wright

28. “I was offered a few shows, but the money didn’t work out, but I’m not very keen on judging such shows. I’m happy in my space as a composer.” — Pritam Chakraborty

29. “I can’t play a character that I am judging.” — Rachelle Lefevre

30. “Nashville is a boys’ club of redneck conservative ideas. But they’re ready to embrace gay people. I never felt for one second that someone was judging me. Some people are like, ‘Oh, I love gay people’ in that ‘I have lots of black friends’ kind of way. It’s awkward, but you have to appreciate that they’re trying.” — Shane McAnally

31. “Finding a programmer to work with if you don’t already know one will be a challenge. Merely judging if a programmer is exceptional vs. competent will be very hard if you are not one yourself. When you do find someone, work together informally for a while to test your compatibility.” — Jessica Livingston

Also Read:   55 Inspirational Quotes About Life And Pursuit Of Happiness

32. “I can’t judge any of you. I have no malice against you and no ribbons for you. But I think that it is high time that you all start looking at yourselves and judging the lie that you live in.” — Charles Manson

33. “Keep talking about moving toxic wastes, but never let it cross your mind to quit producing them. Keep Judging yourselves in Manson. Don’t look in the mirror. You will serve the Earth as much as she serves you or you will commit suicide.” — Lynette Fromme

34. “I kind of learned that I am way too tough of a critic on myself and that other people are not judging me as harshly as I judge myself, so I need to give myself a break.” — Lindsay Sloane

35. “As long as male behavior is taken to be the norm, there can be no serious questioning of male traits and behavior. A norm is by definition a standard for judging; it is not itself subject to judgment.” — Myriam Miedzian

36. “Out of the past come the standards for judging the present; standards, in turn, to be shaped by the practice of present-day dramatists into broader standards for the next generation.” — George Pierce Baker

37. “In parenting, as in judging, the days are long, but the years are short.” — Don Willett

39. “We give you characters we’d feel very comfortable judging, and then go: ‘Oh yeah? Watch this’.” — Paul Haggis

40. “Everyone has untold stories of pain and sadness that make them love and live a little differently than you do. Stop judging, instead try to understand.” Anonymous